Max Honig, a DMII graduate, is making waves using the skills he learned in the Animation, Visual Effects, and Interactive Content Program.  Shortly after he graduated in 2015, KTBS 3 News hired Max as an Animation and Graphic Design Specialist to work on motion graphics.

Max says that his education at DMII opened the door to a professional career and prepared him for the challenges ahead. 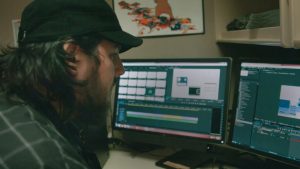 “It broke the barrier between me (someone who doubts their abilities constantly) and the hugely scary world of design and animation,” says Max. “It made that world accessible to me.”

Max, who develops the graphics and animations for newscasts, community projects, yearly events, and web, says that his work on a commercial for a Natchitoches based Pharmaceutical company was daunting at first, but the experience was invaluable.

“The freedom I was given to design and animate the script was scary. I was responsible for bringing someone’s idea to life… oi! It all worked out though, everybody thought it was great and I learned a ton,” says Max.

He went on to say that every project he’s worked on has taught him something that has ultimately made him a better artist and that he would recommend DMII to others.

“It’s a great way to get an enormous amount of information and skill into your brain and hands in a short amount of time.”